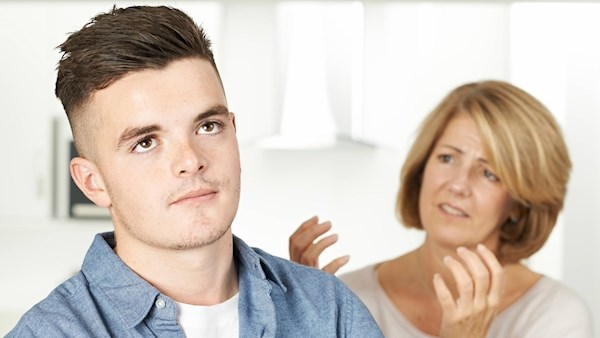 My son has started to hang around with a bad crowd and I’m worried about him. I’m concerned he is being led astray. Last month I found alcohol in his room. When I confronted him about it his response really scared me. When I told my husband about his reaction he got into an even bigger row with him and he stormed out of the house and we didn’t see him until 1am that morning.

He tells us we are snobs and we don’t like his new friends because they’re not from our area. He recently did the Junior Cert and I’m worried he has failed most of the subjects. He has asked us if he can go camping with his new friends over the August holiday.

We really do not know what to do. I also think he might have started smoking, I’m finding myself not sleeping thinking about what is happening to our child. He is the eldest and now his younger brother is beginning to act up too. We need help.

It sounds like you are having a difficult time with your eldest son. But the good news is you’re not alone and the even better news is that this phase, as all the research shows us, eventually pass and your relationship will resume to normal service. However, it is important you manage your own anxiety here.

The fact you are not getting sleep and ruminating on what is going on in the family is not healthy and will certainly not help you to understand how best to support your son as he goes through this turbulent phase in his adolescence.

What is it about these new friends that you do not like? In my experience the more you show your son you do not approve of his new group, the more he will align with them. Nothing is more appealing to a young teenager who is developing a little recalcitrant spirit than their parents disapproving of something. Remember when you were younger and your parents told you they didn’t like a band or song?

How did that position you? Well, if you were like most teenagers, you probably played that song a little louder than you wanted, just to show them how different you are to them. That’s the folly of youth, to revolt against the perceived authority. Michel Foucault said: ‘Where there is power there is resistance’. I find this quote such an important idea to consider when you think about a teenager’s behaviour.

They often position us into that uncomfortable space of authority, and yet we must be authoritative. But, to truly deescalate the current rising tension in the house if you take away some of that perceived power you would remove a considerable amount of what your son is fighting against.

And what I mean here is to show your son that you do not hate his friends. I had a client last year who was going through some of the same issues you describe in your email. Their son was very angry that his parents didn’t like his friends.

And I prescribed for the parents that they get to know his friends, that they make an effort to show their son that they did not, in fact, hate his son’s friends. The father told me it would be difficult because he did, in fact, hate them. His wife also said that she didn’t care for them either but they both agreed and said that they would make the effort.

They invited his friends over, they had sleepovers and meals in the house. This actually brought about a huge shift in tension in the house. And I think it is something you should really consider doing. Change how you see his friends, maybe they are not as bad as you first imagined, invite them to your house, get to know their parents, show your son that you do not hate them.

In relation to the Junior Cert results, relax — the outcome will not change due to worrying about it. Sometimes we need to do a bad exam to focus us on what we truly want from our education. Wait until the results to have that discussion with him. The more you push him the more he will push back, let him see that it’s his future and he will shape it whatever way he wants.

Boundaries need to be in place so that your son understands that if he breaks them there will be ramifications. It sounds like he is testing those boundaries to see where the line is. Be clear about that, nothing causes tension more in a family than opaque boundaries. Your son is right in the middle of that adolescent storm, how you deal with this will shape your relationship with your younger son. He is watching everything, let him see that you are fair but also your word meanings something.

Allowing your son to go camping with his friends really depends on whether you trust him or not. You said he is impressionable, that might hint at an issue with self-esteem.

Always listen to your gut instinct. He might not be ready for a weekend like that just yet. Maybe, if you explain to him that you would like to get to know his friends first and then you could decide on the camping trip. Adolescence is a challenging time for everyone, how you manage the next two years is crucial for the entire family unit.

Being happy isn’t a magic trick, it takes hard work

HAPPINESS can be such an elusive concept. What does it truly mean anyway? When ...